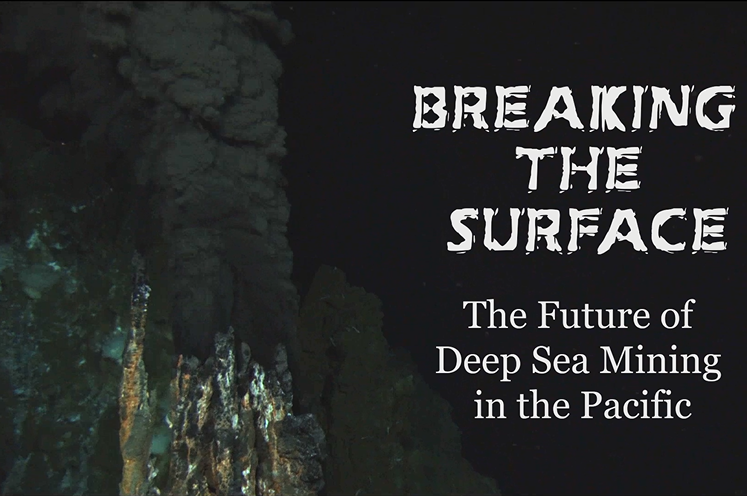 Suva, Fiji – Government and community consultations in Papua New Guinea and Vanuatu over managing future opportunities and potential risks associated with the nascent deep sea mining industry are featured in a new film.

The short film, "Breaking the Surface: The Future of Deep Sea Mining in the Pacific", takes a regional focus to highlight the two countries’ consultation processes and efforts to explore this emerging industry’s potential.

It was commissioned by the European Union in collaboration with the Pacific Community (SPC) through the regional "Deep Sea Minerals Project".

Papua New Guinea, being the only Pacific nation to issue a deep sea mining license to date, looks likely to be the first country in the world to begin the pioneering of deep sea mining.

This film showcases how its government has been consulting local communities and national stakeholders about its plans to manage the development of this new industry and that it has designated a coastal area of benefit in an effort to recognise coastal communities living nearest to offshore mining activities.

The short film, produced by Flinch Marketing Ltd, features interviews with Papua New Guinea’s Secretary of the Department of Mineral Policy and Geo-hazards Management, the Chairman of the Central West Coast Seabed Mining Landowner Association, and Vanuatu’s previous Minister for Lands and Natural Resources as well as the Executive Director of the National Council of Women.

It is the third in a series of films produced by the Deep Sea Minerals Project, following "Under Pressure" which examined different stakeholders’ perspectives involved with deep sea mineral resources in the Pacific, and “Out of Darkness", which focuses on environmental impacts of deep sea mining.

The films are available on the Deep Sea Minerals Project website: http://gsd.spc.int/dsm/index.php/12-videos/93-breaking-the-surface and the SPC YouTube site: https://www.youtube.com/watch?v=W15_DpVdSpo

While deep sea mining has not commenced anywhere in the world, more than 300 exploration licences for deep sea minerals have already been granted throughout the Pacific. The Deep Sea Minerals Project is working closely with Pacific Island countries in developing national deep sea minerals policies and legislation.

The project has been supporting its 15 participating countries to ensure that the future management of their deep sea minerals resources is built on greater transparency and stronger public accountability, as well as ensuring any mining activity is carried out in accordance with international law, with particular attention to the protection of the marine environment and securing equitable financial arrangements for the benefit of Pacific people.

Mohammed Nazeem Kasim, EU Press Officer, This email address is being protected from spambots. You need JavaScript enabled to view it.