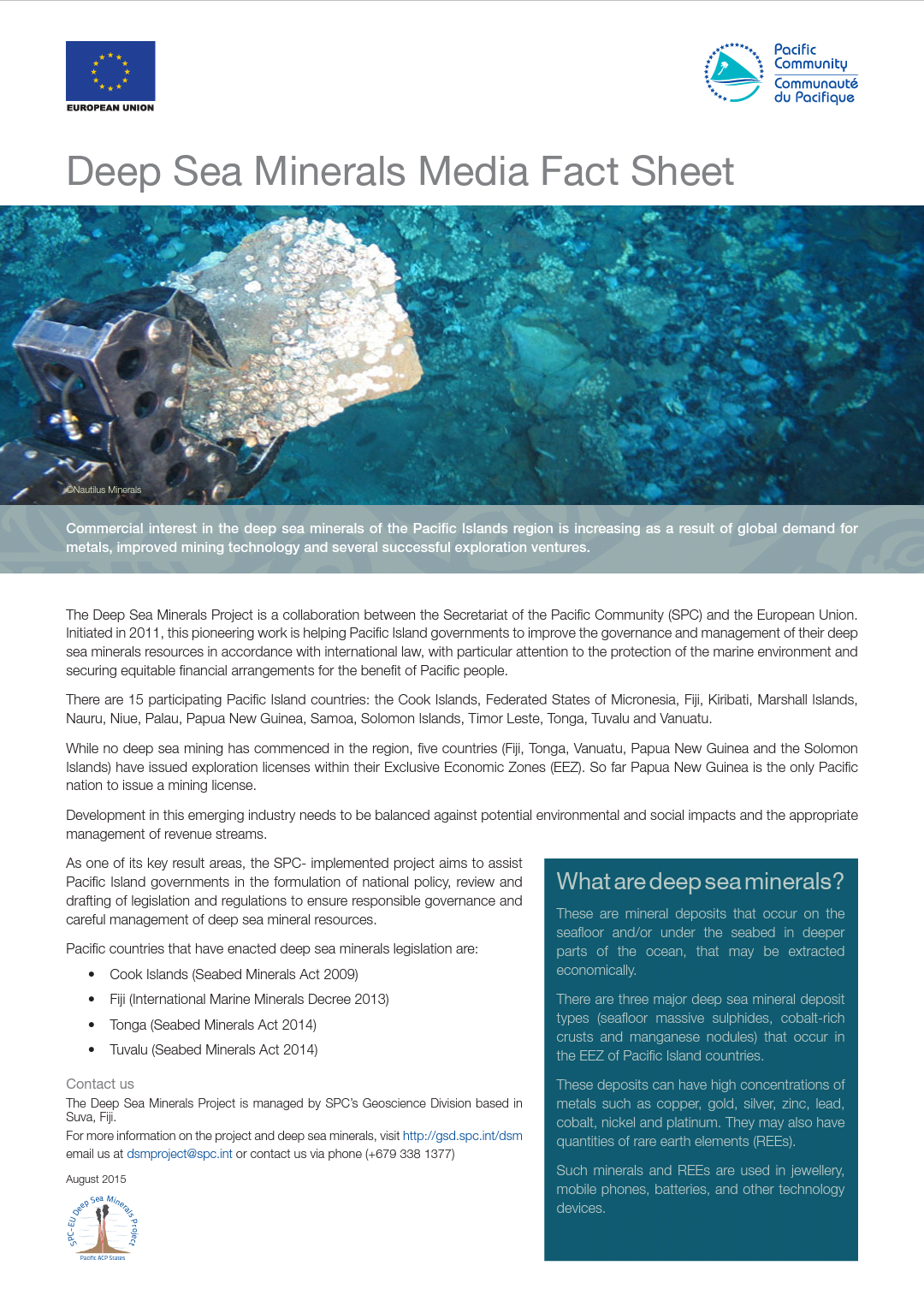 1.  What are deep sea minerals?

The three major deep sea mineral deposits that have excited commercial interests include Seafloor Massive Sulphides (SMS), Manganese Nodules and Cobalt-rich Crusts. Many of the world’s deep sea minerals deposits are formed near the geologically active area known as the Pacific Rim of Fire.

SMS deposits are formed by active hydrothermal vents sometimes referred to as “Black Smokers”. These high pressure superheated fluids escape through cracks in the earth’s surface and mix with cold seawater at depths of 400-5000 metres. When this happens the minerals that are formed and fall to the sea floor include high concentrations of metals such as Copper, Gold, Silver, Zinc and Lead.

Manganese Nodules occur on the ocean floor at a depth of 4000-6000 metres and they include Nickel, Copper and Cobalt. Cobalt-rich Crusts generally occurs on seamounts and around the flanks of volcanic islands at about 400-4000 metres deep and they include Cobalt, Nickel and Platinum.

Currently in the Pacific the most commercially viable mineral deposits are the Seafloor Massive Sulphides. This is because of their high concentration of metals and the discovery of accessible sites in relatively shallower depths of around 1500 to 3000 metres. The proposed method of mining Seafloor Massive Sulphides also focuses on relatively small areas of the seabed with a portable harvesting system that can be moved from one site to another in a matter of days.

2. What do we know about deep sea mineral resources in the Pacific?

Scientists only proved the existence of hydrothermal vents in 1977 but now deposits of Seafloor Massive Sulphides have been found in the territorial waters of Papua New Guinea, Tonga, Fiji, the Solomon Islands, and Vanuatu.

From the mid-1970s to the mid 2000s SOPAC, now known as the region’s Geoscience Division (GSD) of the Secretariat of the Pacific Community, engaged in exploration efforts for deep sea minerals in partnership with Pacific Island Countries. Between 1985 and 2005 SOPAC and the Government of Japan worked with 12 Pacific Island Countries to assess the resource potential for the three target types of deep sea mineral resources.

In recent years, commercial interest in the deep sea minerals of Pacific Island Countries has increased rapidly as a result of increasing global demand, improved mining technology and several successful exploration ventures. Deep sea minerals that occur with the Exclusive Economic Zones (EEZs) of many Pacific Island Countries are increasingly being recognized as a future potential source of revenue and economic development.

In 1997 the Canadian company, Nautilus Minerals, was granted with the first offshore exploration licence in Papua New Guinea. In January 2011 the PNG government granted Nautilus a 20-year licence to mine a site in the Bismarck Sea, 30 kilometres off the coast of New Ireland. But a dispute with the Government has suspended the company’s plans (to use underwater robotic technology to extract up to 1.3 million tons of ore containing minerals per year from their site known as Solwara 1).

The discovery of SMS deposits in the waters of Papua New Guinea and Tonga led to a rush for applications for exploration licences within other countries maritime zones. Over 300 exploration licenses have now been granted within national jurisdictions of a number of Pacific Island Countries such as the Solomon Islands and Vanuatu. If metal prices continue to rise countries like the Cook Islands are likely to become involved in the extraction of Manganese Nodules which are seen as more challenging to harvest.

Pacific Island countries have also been active in seabed mineral development beyond national jurisdiction, by sponsoring companies to carry out exploration activities in international waters, where the seabed is known as ‘the Area’ and is managed (‘for the benefit of mankind as a whole’) by the International Seabed Authority (‘the ISA’).

4. What are the potential impacts of mining deep sea minerals?

Marine scientists are only starting to learn about the newly discovered organisms that depend on hydrothermal vents for life. Some fear that deep-sea mining activities could cause lasting and irreparable damage to these unique habitats before we develop any detailed understanding of these new species.

The Pacific Deep Sea Minerals Project recommends that Pacific Island countries prioritise the development of national polices and laws before any mining is contemplated. Throughout the Pacific region civil society organisations are asking tough questions about what steps their Governments are taking to ensure these important deep sea mineral resources are managed in the most environmentally and socially responsible way, for example the Deep Sea Mining Campaign.

Because there is still a great deal to learn about how the ocean environment may be affected by deep sea mineral exploration and mining activities the Pacific Deep Sea Minerals Project advocates that all countries should adopt the ‘precautionary approach’ to the management of their deep sea minerals resources.

5. What does the Pacific Deep Sea Minerals Project Do?

The Pacific Deep Sea Minerals Project has been specifically designed to operate as an independent adviser for Pacific Island Countries. The role of the Project is to provide countries with the relevant information and advice they need to make informed decisions whether they want allow deep sea mining within their national jurisdictions.

If countries decide to engage in deep sea mining activities, the role of the Project is to provide countries with the technical assistance needed to assess the risks and meet their legal responsibilities under international law. For example, the Project is also designed to ensure that countries have in place an effective environmental management and monitoring regime for any offshore exploration and mining. According to international law any Pacific Island contemplating deep sea mining must also commit to protecting the ocean environment, minimizing pollution, and to preserving any rare or fragile ecosystems and ocean habitats.

If countries do decide to give out exploration and mining licences for their deep sea minerals resources it is critical that they contain terms that protect the country from environmental damage, protect the people from impacts on their livelihoods, and ensure a proper financial return that will be collected and managed responsibly. The Pacific Deep Sea Mining Project is funded by the European Union to assist Pacific Island countries achieve this outcome.

6. What has the Pacific Deep Sea Minerals Project already done to improve the governance of deep sea minerals in the Pacific?

The Pacific Deep Sea Minerals Project has already undertaken a number of activities designed to inform a wide range of stakeholders about the technical, legal, economic and environmental impacts of deep sea mining. The Project has developed a series of practical training workshops and related information resources to help build governance capacity and engage key stakeholders in the decision-making process.

Over the last two years the Project has held “National Deep Sea Minerals Stakeholder Consultation Workshops” in the 15 participating countries, where different stakeholders, including community leaders and NGOs, are invited to discuss opportunities and issues related to deep sea minerals. The Project now aims to work with the countries, via a Government focal point and a multi-stakeholder National Offshore Mining Committee, to implement the priority actions identified in each national workshop.

In August 2012, the Project supported countries to launch a Regional Legislative and Regulatory Framework (RLRF) that will enable countries to develop national frameworks needed to improve the management of their own marine mineral resources. The Project is now working with member country Governments to develop national policy and law for the State’s regulation of seabed mineral activities.

The Project also runs a legal internship programme to train up Pacific Island lawyers on seabed minerals law, and can fund other technical training opportunities for Government personnel from the region. For more information on these opportunities, please contact the Project on: This email address is being protected from spambots. You need JavaScript enabled to view it..

More information about the Project’s specific activities can be found in the 6-monthly and annual reports.

The Project will continue to support greater efforts to increase public awareness of deep sea mineral issues and to increasing stakeholder engagement in the decision-making process. Better scientific information and greater transparency will improve decision-making and result in better national management systems for deep sea minerals. These systems should help to minimize any potential degradation of the environment, ensure equitable distribution of benefits, and help to avoid possible conflicts.