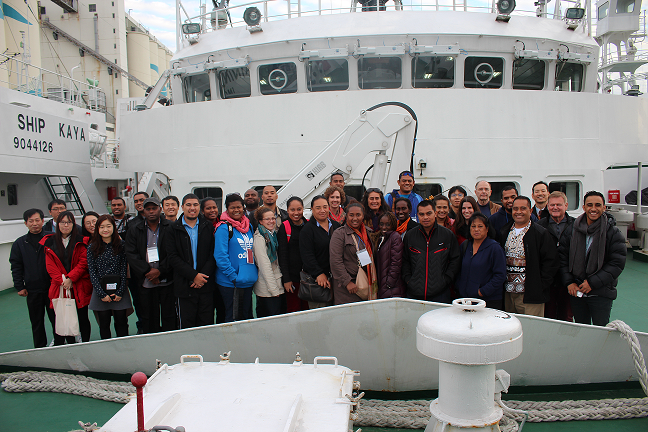 Participants of the workshop aboard the RV Haeyang 2000 of the Korea Hydrographic and Oceanographic Administration, docked in Busan, Korea.

Busan, Korea- Marine science and marine scientific research play a critical role in the sustainable development of the oceans, seas and their resources.

This is consistently recognised by the United Nations General Assembly in its annual resolutions on oceans and the law of the sea, the 2012 United Nations Conference on Sustainable Development and by the Small Island Developing States Accelerated Modalities of Action (SAMOA) Pathway adopted in 2014.

To address this, the Division for Ocean Affairs and the Law of the Sea of the United Nations Office of Legal Affairs (DOALOS) and the Intergovernmental Oceanographic Commission of the United Nations Educational, Scientific and Cultural Organisation (IOC-UNESCO), in partnership with the Pacific Community (SPC) European Union supported Deep Sea Minerals Project and the Korea Maritime Institute (KMI), recently organised a first of its kind training workshop for Pacific Small Island Developing States government officials and scientists in Busan, Republic of Korea.

Participants from 13 Pacific Island states attended the training course which covered the legal, technical and scientific aspects related to the conduct of marine scientific research under the United Nations Convention on the Law of the Sea in particular with regards to the rights and obligations of coastal and researching states. Participants included government officials and scientists from both coastal and researching states.

“This training course is very significant as it enhances my skills and capacity to help my country embark on developing its marine scientific research policy and other relevant policies in accordance with the United Nations Convention on the Law of the Sea. I’ve identified gaps in our legislations dealing with marine scientific research, hence this training is supportive for improving and strengthening of such areas for the benefit of Vanuatu citizens,” Vanuatu’s Maritime and Ocean Affairs Division Desk Officer, Mr Roel Tari, said after the training.

Pacific leaders have identified the need to strengthen national capacities in marine scientific research, recognising the benefits that could be derived from investing more in this field as a means to increase scientific knowledge of the marine environment and support national and regional economic growth in marine sectors, such as shipping and offshore energy, as well as in security and defence.

It also creates enabling conditions for pioneering new and more sustainable routes for exploitation and technological development such as bioprospecting or deep seabed mining.

Increasing scientific knowledge and developing research capacity are also critical for ensuring the protection and preservation of the marine environment.

The training teams included regional and international experts in their respective fields drawn from DOALOS, IOC-UNESCO, SPC, the University of the South Pacific and research institutes.

The workshop concluded on 11 December.

Mohammed Nazeem Kasim, EU Press Officer, This email address is being protected from spambots. You need JavaScript enabled to view it.